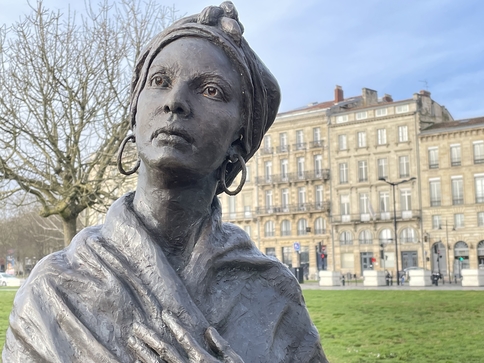 Did you notice this statue of Marthe Testas as you walked along the River Garonne? You can see her standing in front of the Maritime Stock Exchange on the Quai Louis XVIII. Marthe is a symbol of the triangular slave trade exploited by Bordeaux and other French cities for over 150 years.

Marthe was captured around 1780 and brought back to Bordeaux by two brothers, Pierre et François Testas. Later on, she was sent to the Caribbean, where she worked as a slave on the family plantation. She was freed when François died, and this is symbolised by the broken chains at the foot of the statue. Marthe lived to the ripe old age of 105. Her grandson, François Denys Légitime, became President of Haiti.

The triangular slave trade flourished in Bordeaux between 1672 and 1837. Ships left Bordeaux loaded with wine, food and other goods. They reached the west coast of Africa some two months later. Here, the cargo was exchanged for slaves, who were then sent to work on plantations in the French colonies. The crossing was dangerous and the conditions inhumane.

Created by Woodly Caymitte, or “Filipo”, this statue of Marthe Testas was erected in 2019 as part of slow but determined efforts to acknowledge this painful chapter in Bordeaux’s history.