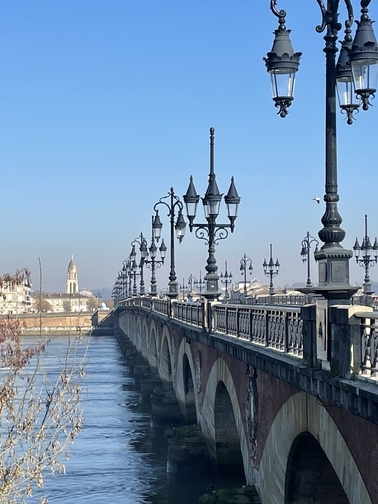 The Pont de Pierre, or stone bridge, is one of the icons of Bordeaux. Can you think of any others, by the way? It was built between 1819 and 1822 under the orders of Napoleon and was the first bridge to cross the river Garonne at Bordeaux. It remained the only bridge to link the left and rights banks until the Pont Saint-Jean was built in 1965. The strong current and high tidal range (6m) posed major challenges for the builders. The Pont de Pierre is 487 m long and 19 m wide. It has 17 arches – exactly the same as the number of letters in Napoleon Bonaparte!

Take Tram B to Quinconces, then walk towards the Pont de Pierre or take Tram C or D to Porte de Bourgogne. See my article on Getting Around in Bordeaux.

You should definitely walk over the Pont de Pierre to admire the Blue Lion at Place Stalingrad. You could stop for lunch at the Ristorante Del Arte, then take a ride on the Bat3 taxi boat to Quinconces, Les Hangars (get off here for the apartment or continue to La Cité du Vin and walk back along the river).