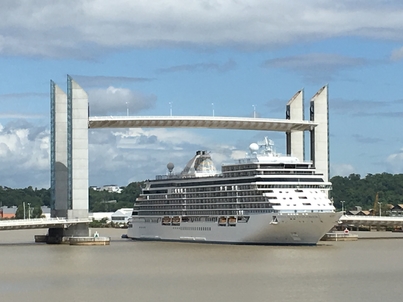 Inaugurated in March 2013, the Pont Jacques Chaban-Delmas opened almost two hundred years after the first bridge over the river Garonne at Bordeaux – the Pont de Pierre. The construction work took 3 years, from 2009 to 2012. The bridge takes it name from Jacques Chaban-Delmas, a former mayor of Bordeaux.

The bridge links Bordeaux’s left bank at Quai de Bacalan with the Bastide district on the right bank. It is wide enough to accommodate 4 lanes of traffic, two bus lanes and generous pedestrian walkways shared by joggers, cyclists and roller skaters.

The bridge can cope with up to 43,000 vehicles per day and perform up to 60 lifts per year. The mobile deck takes 11 minutes to reach its highest position. The bridge is closed to traffic for about two hours each time the deck is raised.

You can enjoy great views of the bridge from the top of the parking facility just opposite our Bordeaux apartment. At night, the towers glow blue at high tide and green at low tide.

You can easily walk to the bridge from the apartment, or you can hop on Tram B for one stop to Cité du Vin. See Getting Around in Bordeaux.