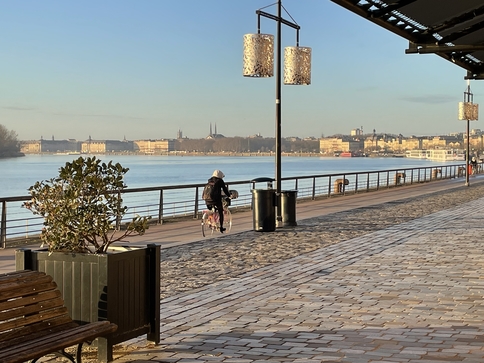 Bordeaux is a wonderful city to explore on foot! Here are the quays, gloriously empty in the early morning sun! Waiting for you, right opposite the apartment. So put on your walking shoes and get ready for a pleasant stroll along the river Garonne to the Place de la Bourse. As the day goes on, you’ll no doubt be sharing the walkway with joggers, skateboards, electric scooters and bikes, so please do take care! For now though, it’s all yours.

Feel the sun on your face as you walk towards the centre of Bordeaux. Let your eyes follow the curve of the river as it passes through the city. The French name for the harbour of Bordeaux is “Port de la Lune”, because of the crescent shape of the river. Look up and admire the majestic twin spires of the Church of Saint-Louis-Des-Chartrons, a gothic revival church built between 1874 and 1880. It is dedicated to Saint Louis, king of France (1214-1270).

A little further on you’ll no doubt spot the statue of Marthe Testas, standing in front of the handsome Bourse Maritime building. Coming up on your right, the Place des Quinconces, one of the largest city squares in Europe. It is also home to the 54 metre tall Monument aux Girondins, which you may want to explore later.

The magnificent Place de la Bourse, one of the city’s most recognisable landmarks, is next up on your right. The king’s architect, Ange-Jacques Gabriel, drew up the plans for this superb construction built between 1730 and 1775. But which king are we talking about? King Louis XV of France, of course, otherwise known as “Louis the Beloved”. But more about the Place de la Bourse later!

Just after the Place de la Bourse, you’ll pass the Bar Castan, one of Bordeaux’s best known bars. Where better to enjoy a coffee and croissant, a glass of Lillet (the local aperitif) or any of the fine Bordeaux wines. Relax and watch life go by for a few moments. Built in 1890, the interior of the Bar Castan is designed to evoke faraway places. I’ll say no more, go and see for yourself!

There are so many walks to enjoy in Bordeaux, and I’ll be writing about more in the future!

Tip: to see my collection of walks in and around Bordeaux, Libourne and Saint Emilion, you might want to download Go Jauntly. Go Jauntly is a free “walking app for everyday adventures”, to quote the authors. It’s super simple to use, and you can even add your own walks for others to enjoy. My collection of walks (by jenny320) includes: The Two Bridges Trail, Bordeaux-Bacalan, Bordeaux Jardin Public, Bordeaux’s Historic City Centre, Market Day in Libourne and Spring near Saint Emilion.